The exchange between South Korea and The United States of America has been nothing but a series of missile threats and military practices from both countries. A few months back in January, President Donald Trump taunted President Kim Jong-un in a tweet about how his nuclear button is “bigger and more powerful”.

Seems like they have come a long way after the tweet as the summit finally took place in Capella Hotel, Sentosa Island, Singapore on June 12, 2018. Even after Mr. Trump himself sent a formal letter to cancel the meeting, they met eventually. Who is the real winner of the Summit? None other than the hosting country, Singapore. After a 13-seconds handshake, a courtyard stroll, unscripted moments, and a joint statement signed, the two leaders left Singapore but the spotlight stayed on the Lion City.

According to the Singapore Straits Times, hosting the summit increased Singapore’s exposure to the world to the tune of US$169m, thanks to media, tourism and retail exposure. The hotels that the two leaders resided in, the Shangri-La and St. Regis, acquired mentions in a fifth of the articles that were written about the summit.

In return for the cost they have spent – estimated at US$16m for the summit – on security, media, and food, they stand to boost the country’s tourism and Singapore’s branding in a globally competitive environment according to Mr. Nicholas Fang, director of security and global affairs at the Singapore Institute of International Affairs.

Singapore received media coverage from all around the world – from news to social media mentions. This contributed greatly to the country’s tourism revenue and perhaps, turned it into one of the preferred locations for future summits of the world leaders.

After the acclaimed “from the beginning, we get along” quoted by Mr. Trump himself, they were joined with the rest of their representatives for a working lunch. The lunch menu featured “a very creative menu showcasing the flavours of three cultures and heritage” according to Pastry chef Janice Wong of 2am:dessert bar, as reported by the Singapore Straits Times.

Singapore chefs commented on the menu presented during the summit, saying that it was a “safe choice” or “a diplomatic course” for the two countries to dine on. They highlighted the Asian and Western cultures in the dishes, although Chef Pang Kok Keong from patisserie Antoinette disagrees about the Haagen Dasz ice cream, saying that they should have opted for a Korean dessert or even a chendol to highlight one of Singapore’s well-known desserts.

They were seated opposite each other at the side of the white table and Mr. Trump even jokingly asked the photographers to make sure that everyone looked “handsome” and “thin”, which became a meme on social media, thanks to Mr. Kim’s reaction.

The food industry benefitted greatly as their innovation in the fusion of food made it possible for two different cultures to interact with one another, to understand and to stand on the same ground. Food brings people together, and in this particular case, might even bring world peace. 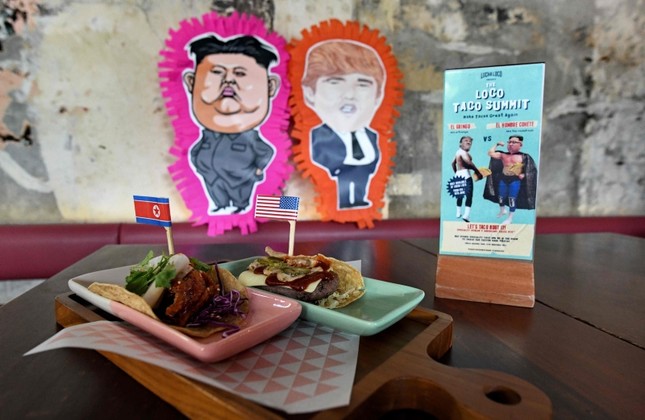 The Trump-Kim summit was such a momentous event that tourism and businesses alike have taken this opportunity to commemorate this historic event by launching medallions, stamps of Trump-Kim and Trump-Kim themed food at Singapore restaurants such as World Peace burgers to Trump-Kim Bromance cocktails that you can choose from!

In addition to that, The Star Online also explained at great length what the signatures of the two leaders meant and their body language. It reflected their character as a person. There is a photojournalism exhibition by Kevin Lim on the Trump-Kim summit on display at the National Library of Singapore building that not only captured the moment for posterity, but also made it to the front cover of top news publications such as TIME.

Singapore is known for hosting summits in the past such as the Wong-Koo Summit and Xi-Ma Summit. This is due to the country’s enhanced level of security and safety.

Singapore has built a reputation as a country that is capable of providing a venue for historic moments and in return, their economy has flourished and their creative industry has grown as they are in the spotlight where the whole world can see them.